With the assistance of APPM, the memorial to heroes - aviators of the Great Patriotic War was unveiled in Novodvinsk 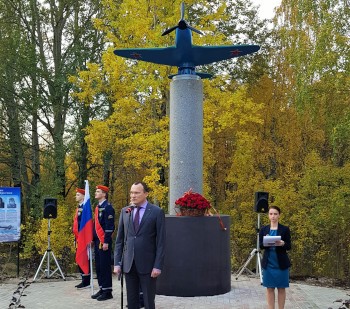 On September 25, 2020, there was the official unveiling ceremony memorial to air garrison of USSR Northern Fleet, which was located on Yagodnik Island. Implementation of this project became possible owing to Arkhangelsk PPM, JSC.

The Head of Regional Office of the Russian Military Historical Society (MHS) Sergey Kovaliov noted that this memorial is the symbol of gratefulness to pilots, technicians, air defense fighters, who performed their duties on Yagodnik Island. According to him, it is very pleasant, that one of the initiators of memorial installation was Novodvinsk Office of MHS. “Erection of this memorial is a landmark event, which took place only due to remarkable activist group, veterans, who took part in the implementation of this project. This year more than 200 similar initiatives are in progress of implementation in the region, but Novodvinsk holds a special place thanks in large part to them and to APPM support” – pointed out Sergey Kovaliov.

Since the beginning of the Great Patriotic War, the second aviation corpse of the chief council of naval forces of the Northern Fleet was based on Yagodnik Island. Fighters provided air defense to convoys in the White Sea from enemy air forces. In 1943, an aviation-repair base of the Northern Fleet was built. This base was intended for assembling of aircrafts under lend-lease and for repair of war-worn technical equipment. Military specialists in cooperation with the youngsters from adjacent villages and Voroshilovskiy settlement, the future Novodvinsk, repaired aircrafts. They repaired more than one hundred aircrafts.

These milestones of history are described in a new and already popular book of Arkhangelsk PPM “Time of a deed”, which was published just before mill’s 80th anniversary and was devoted to the history of the mill, Arkhbum and the whole region during the Great Patriotic War. The authors of the book are the members of APPM Department for Enterprise Projects, active members of the Russian Military Historical Society Pavel Fasonov and Elena Zakharova. The edition was prepared at the initiative of the member of the Board of Directors of APPM Vladimir Krupchak.

The memorial is the result of cooperation of veterans and mill’s staff. The Head of Pulp Production Department Vadim Moseev became a mastermind of the project. The members of his family worked and did service in garrison on Yagodnik Island.

“During the War simple workers from factories, collective farmers raised money for construction of aircrafts and tanks – they made every effort for the victory. Their contribution can hardly be overestimated. And when the society addressed to us, we could not ignore its request. Moreover, our partners, contractors and private persons joined us. Our workers cast the model of this beautiful aircraft in their free time, - noted Director General Dmitriy Zyliov at the unveiling of the memorial. - The column has the form of the shaft of paper machine and it is extremely symbolical, since the garrison, located at this place, defended the mill as well. I congratulate Novodvinsk citizens with the unveiling of memorial. I am sure that this place will become a meeting point for all citizens”.

The memorial is erected in the park on the bank of the Northern Dvina river with a beautiful view to Yagodnik Island. The park was landscaped under the program “Organization of comfortable urban environment” and is a popular recreation site.